Here we look at the use of paint and wall paper in the Victorian and Edwardian drawing room, carpets, curtains, and lighting; the decorative details.

The objective, according to Muthesius, was to create a ‘jewel-casket’. This was achieved completely at the peak period of rich colouring with the Gothic revival. In general, throughout the Victorian and Edwardian eras the drawing room had a lighter feel than the masculine dining room. 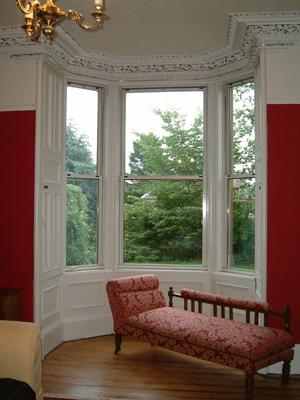 In most homes throughout the Victorian and Edwardian periods, the ceiling was papered with a relief paper, painted either off-white or using a tint of the main colour. Only in the most extravagant Gothic drawing rooms were very rich colours used.

The cornice and rose were often painted in several colours to highlight the moulding. Gilding was sometime used.

Woodwork, including doors, architraves and picture rails was dark, even black.

In the early Victorian period, wallpaper was still expensive. More affluent homes would have used silk or paper as a wall-covering, but in other homes paint was used. Cheaper roller-printed wallpapers were available from the late 1830s, and by the 1870s these were cheap enough for every room in house. By this time wallpaper was ubiquitous in Victorian drawing rooms.

In the middle decades, flock and velvet wallpapers became very fashionable. These heavily patterned papers in dark greens and burgundy were used above the dado. These papers had complicated designs, often with geometric patterns. Henry Cole, the superintendent of the Great Exhibition, encouraged the use of rich colours through his journal.

The next fashion was for wallpaper patterns incorporating scrolls, vines and birds. These designs were generally small-scale and finely detailed. Leather papers and embossed papers such as Lincrusta and Anaglypta were used on the dado, frieze and even the ceiling, dark painted for the dado and lighter above.

Owen Jones argued against pictorial papers and three-dimensional designs and the second half of the 19th century saw a very gradual simplification.

Where this call was heeded, the dado was removed. Flat paint and stencil patterns above dado and below picture rail were used. The picture rail and frieze would be painted white or using a tint of the main colour. However, the supporters of the Aesthetic and Arts and Crafts styles kept the tripartite division.

In the 1890's, the wallpaper was a large-patterned, floral design, with a pictorial frieze, and the ceiling would have had a relief pattern paper. 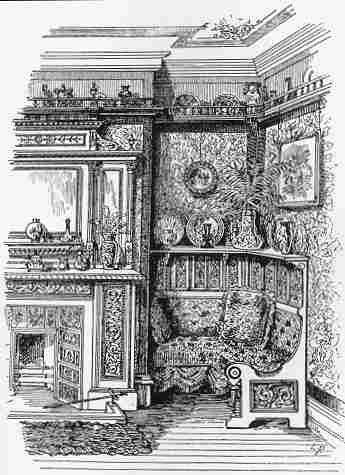 Art Nouveau styles brought olive and sage greens and mustard yellows for walls with stencilling and friezes in organic shapes and stylised birds and foliage.

The frieze was often decorated with a special frieze paper, or with a painted or stencilled mural. Stencilling became very fashionable in the Edwardian period.

By 1910, middle class rooms had taken up the call for less clutter and more simplicity in decoration; the wallpaper would have had a plainer pattern or walls were just painted. However, this fashion would have taken longer to appear in lower class homes. 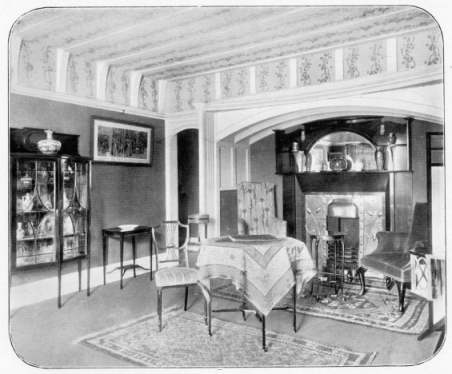 In the 1920s, decor continued this evolution towards paler colours and increasing simplicity. Shades of pale lime green might be mixed with darker shades for carpets, curtains in creamy yellows and pale cream paint for the walls and ceiling.

In the middle years of the 19th century, wall-to-wall carpets were fashionable, but outside this period there would be a central carpet, with the surrounding floor boards painted or stained dark and varnished. The skirting would be a in similar finish.

Carpets were in elaborate designs with flowers and foliage, often in light colours, or else Turkish rugs and carpets were popular in the later decades.

The window had three layers of curtaining; wooden Venetian blinds, net curtains, and curtains under a pelmet.
The designer Loudon wrote:

"Curtains give such an air of comfort to a room, whether it be to the spectator from without, or to the occupant within, that we could wish no cottage, however humble, to be without them. For the same reason, we should wish cottage windows to be large, that the curtains may be displayed without too much obstructing the light."

Summer curtains would be of white muslin whereas rich fabrics such as velvet and silk were used during the winter.

The curtains hung on heavy wooden or brass poles and were tied back with ropes or metal fittings, decorated with tassels, ribbons and festoons. 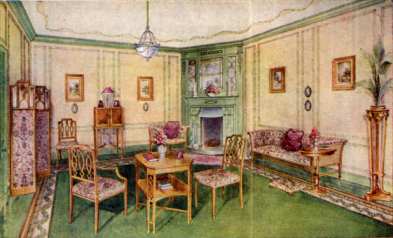 The fireplace would have a fresher treatment than in the dining room but would still have had a cloth drape, probably in a dark colour as it would have needed washing frequently.

Lighting would typically have been provided by gas wall lights, and candlesticks on the table.