The objective for the bedrooms in Victorian and Edwardian houses was good hygiene, so all decorative details, including furniture and fabrics, had to be easy to clean and the rooms easy to redecorate. In the larger houses, guest rooms were often more elaborate.

The cornice was often painted in a colour picked out from the fabric used for the curtains and other furnishings.

Below this, the picture rail and frieze were generally white, although the frieze might be decorated with a stencilled border.

The floor boards were usually painted a dark brown, or stained a dark colour. The skirting was either treated the same or painted white. Again to assist with cleanliness, there was no fitted carpet. Instead there would have been a carpet square, rush mats, or oriental or rag rugs.

On the walls, rich colours were in use until the middle of the 19th century, as in the rest of the house. A few people had bedrooms in dark tones, even black, but this was unusual.

By the 1870s it was fashionable to lighten these rooms. The walls were painted or papered a light colour. Paint was white, pale pink, a sea green, grey or blue. Wallpaper was common in middle class homes despite the arguments of some that it was difficult to clean. Wallpaper was pretty yet unobtrusive; floral designs, fruit, ribbons or stripes were popular. 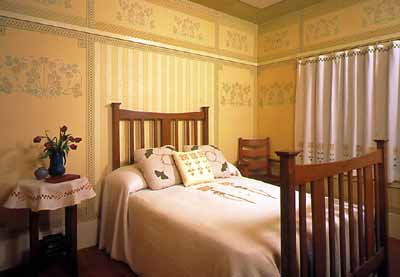 The drapes and curtains, tablecloths, pillows and other cloth was often of the same fabric. Commonly used were chintz, lace, cretonnes, muslin, and dimmity (a fine, self-patterned fabric of cotton). The fabric was trimmed with lace, fringes or tassels. Only the wealthy had heavy fabric.

The windows of bedrooms facing the front of the house, the more public side, had the three-layer treatment; wooden Venetian blinds, net curtains, and curtains under a pelmet. Less public bedrooms would just have had simple curtains.

Into the Edwardian era, the décor became lighter and more airy, with chintz curtains in pale colours and delicate patterns. Walls and woodwork were painted white.