For much of history, the washing of hands was as a ritual, rather than for health reasons. Wash-hand basins, washbasins, or simply, basins were originally referred to as 'lavatories', from the Latin term 'lavare', meaning 'to wash'. Once the indoor toilet or lavatory was becoming widespread, people began to say that they were "going to the lavatory" (i.e. to wash their hands) when they were to visit the 'water closet' or WC. The term 'lavatory' has been used to refer to the WC from the middle of the twentieth century.

In parallel, the term 'toilet' has moved from meaning the act of dressing and preparing yourself to be an alternative name for the lavatory. 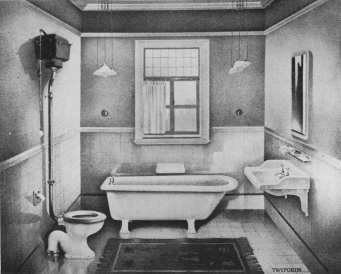 example of bathroom from Twyfords, 1911