The Victorian and Edwardian Toilet

The earliest form of toilet, water closet or WC was of course a hole in the open ground, over a cesspit. Two early enhancements were some form of shelter, and then a seat or cover. By the 18th century, in grander houses the toilet had begun to move indoors, with the cesspit in a cellar. The cesspit was emptied by the night-soil men. For most of the population, a privy or closet in the back yard remained the usual location for the middle classes until the late 19th century and for working class homes well into the 20th century.

Until the 18th century, the chamber pot was the usual form of toilet for households with servants. The pot was emptied by a servant into an open sewer or cess-pit.

The chamber pot remained in use in all households for night-time use until toilets became more common.

The chamber pots of the working-class were usually made of copper, although later ones might be of crockery. The chamber pots for the rich and royalty were solid silver. Subsequent designs hid the pot in a box. In the Victorian period there was even a musical chamber pot that played when the lid was opened.

The earth closet is essentially a chamber pot with dry soil placed in it. and the earliest earth closet was simply a bucket. More sophisticated versions in the early 19th century incorporated a hopper which dispensed dry, granular clay, on top of the waste, into a box. This desiccated the waste and reduced smells. When the box was full the earth and waste could be removed for disposal elsewhere. These continued to be used in urban areas without sewers until late in the 19th century. Henry Moule was the inventor who promoted this method.

The technical challenges in flush toilets were the flush mechanism and a method of prevent smells passing from the drain. Solving these problems took until the late 19th century.

The first flush toilet or water-closet was invented by Sir John Harrington in 1596. Harrington invented both a valve at the bottom of the water tank, and a wash-down system. However it was not widely adopted because there was no supply of running water to flush it.

In 1777, Samuel Prosser invented and patented the 'plunger closet'. The plunger released the waste and also sealed the soil pipe.

Joseph Bramah invented a hinged valve or 'crank valve' in 1778. This sealed the bottom of the bowl. He also devised a float valve system for the cistern.

Early toilet bowls were painted cast iron and had no flange on the rim. These discharged into a separate chamber and then into the cess-pit or sewer. The metal rusted and the seals between the components leaked. Because the valve was unreliable, there had to be an overflow. Although the parts were in a wooden case, the toilet did smell.

The 'U-bend', or the water-sealed trap, was invented in 1782. This could replace the outlet valve. Because it could not jam, it did not need an overflow.

In 1852, JG Jennings invented the wash-out design with a shallow pan emptying into an S-trap. He popularised public lavatories by installing them in the Crystal Palace for the Great Exhibition of 1851; over 827,000 people paid to use them.

By 1870, Thomas Twyford's improved version of the Bramah contained no metal parts, and in 1885 he created the one-piece 'wash-out' toilet, called the 'Unitas'. This used a 'P'-shaped trap. In 1885, he created the first valveless toilet made of china.

Other makers at this stage included Josiah Wedgwood, Thomas Crapper and John Shanks.

During the 1880s Thomas Crapper invented the siphonic system for emptying the cistern. This avoided the problem of leaks common with the earlier floating valve system.

The next development combined the water in the bowl with that in the trap, creating the 'wash-down' design we know today. Further enhancements improved the siphon action of the flush so that heavier waste was washed out. The first British toilet with this design was made at the Beaufort Works in Chelsea, London in 1886.

Whereas modern toilets are made from now vitreous china clay, older models were made in the same way as tiles; from pressed clay. This made porcelain in an off-white colour and the glaze tended to craze. 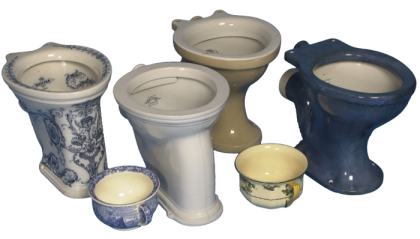 For an effective flush, the toilet required a large quantity of water, delivered quickly. This has normally been achieved with a cistern above the toilet pan.

The earliest cisterns were always about two metres above the pan, connected with a large diameter pipe. They delivered about 13 litres, much more than later designs, because of the simple wash-out pan design.

High-level cisterns were supported on cast iron brackets. These were either screwed to the wall, or mounted on wooden pattresses.

High-level cisterns had a china or wooden pull on a chain, often of a pressed metal type, rather than wire loops.

Early cisterns took the form of a wooden box, usually of oak but sometimes of other woods such as mahogany. The box enclosed a copper or tin tank.

Some cisterns were made from cast iron. These were usually painted black or red or more usually enameled porcelain in the same was as baths.

By the late 1880's improved siphonic flush pans made it possible to reduce the height of the cistern, eventually bringing it down to just above the pan. The materials used for the cistern remained the same, although some tanks were made of vitreous china. These were never as highly decorated as the closets had been.

The one-piece toilet, combining the cistern and pan was introduced in the 1920's.

The elaborate embossed and decorated toilets tend to be pre-1900 and of the wash-out design.

Embossing was used up to 1914. The toilets produced after 1900 in the Edwardian era were more plain. These late models might have a simple egg-and-dart pattern only.

By the 1920s, porcelain was being made in solid colours.

From an early date, the toilet user sat on a wooden seat, rather than directly on the porcelain.

Two designs have been used; in the 'throne seat' the wood covers both the pan and the flush entry. This style could only be used with a higher-level cistern.

The more simple oval seat could be used on toilets with a high or low-level cistern.

The wood used tended to be oak or mahogany.