The Victorian and Edwardian Bath

The modern bath is very similar to its Victorian ancestor from middle and upper-class homes, but it has replaced the 'tin' bath that was used by most people throughout the Victorian and Edwardian periods and into the 1920s in some houses.

Of the early Western civilisations, the Roman's ideas and designs for baths, water supply and sewage disposal are well-documented and demonstrated in archaeological remains. They encouraged daily bathing, although for most people this was in public baths.

These customs, and the technologies, were lost when the Roman Empire collapsed. Perfume was used to mask smells, and waste was thrown into the streets and rivers. In the 16th century, for example, a bath was a luxury. It is probable that royalty had a bath every few weeks.

The earliest baths were made from marble, or terracotta waterproofed with tiles or mosaics, often set into the floor. Pipework was of lead and bronze. The wealthy continued to install plunge baths of this type into the early 19th century. There are known examples of stone baths in Georgian middle-class homes.

Although most people washed their hands from the mid-18th century, bathing did not become a regular activity for most people until the mid-19th century. Even workers in coal mines bathed irregularly, if at all.

By the mid-19th century, the combination of an improved water supply including cheap hot water, advances in ceramics and iron, and a growing awareness of the importance of personal hygiene led to a revolution in sanitaryware.

For much of the 19th century, most people used a portable metal slipper bath. This copper or galvanised iron (colloquially 'tin') bath would be used in the kitchen of many homes, or in the bedrooms of the wealthier. Hot water would be brought in jugs or pails, and the bath would be emptied in the same way.

It was not until the 1880s that most houses for the middle-classes were built with bathrooms and full-length baths, typically of cast iron.

Although porcelain was not suitable for making full-sized baths, special baths for feet, for example, were available. Fireclay with a glaze was used from the late 19th century, and on into the 1920s. They remained expensive compared with the cast iron baths which were introduced in the 1880s.

Victorian baths were usually regarded as furniture and therefore tended to be boxed in. Towards the end of the century, the outside of a free-standing bath was usually painted. 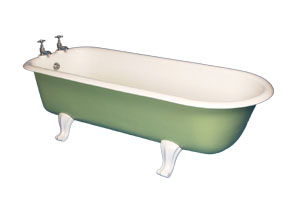 In the second half of the 19th century some wealthier people had shower fittings over the bath with a manual pump to deliver the water. In the 1880s and 1890s some showers sprayed the body of the bather from multiple jets mounted on a framework.

By the Edwardian era, ideas on cleanliness meant that all parts of the bath should be kept clean and therefore the bath was often freestanding, rather than boxed in. The outside of the bath was left plain white.

Early enamel was poor and had to be repainted frequently until new coatings were introduced shortly before the First World War. More modern cast iron and pressed steel baths are coated with vitreous enamel, a type of glass fused onto the metal at a high temperature. 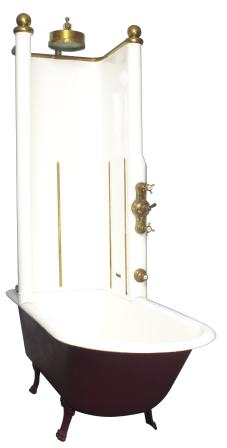 Coloured enamels and porcelain began to appear in the 1920s, and by the 1930s, baths were again boxed in.

Taps (the US term being 'faucet') were usually of polished brass or nickel plate until 1929 when chromium plate began to take over as the most popular and most resistant coating.

The bidet, so popular in France, never became essential in the UK, or in the USA. The term means 'little horse', referring to how the user sits over it to wash 'down below'.