Caring for Your Brick Walls

To care for your brickwork, begin by understanding the types of brick you have.

Your bricks may look plain and rather dull but they are the canvas for all the period detail in your home; look after them but do not over-clean and restore them.

In this section we summarise how you can then manage damp, clean and repoint walls, and replace damaged bricks. We also consider bricks in newly built extensions.

In caring for your brick walls, the most important issue is damp. Old bricks 'work' by absorbing rain but must 'breathe' to let it out again. You do not help your wall by painting it or using a textured coating; moisture will still penetrate it but cannot then evaporate. Your wall will slowly become more and more damp. If you already have paint on a wall, it can be removed but this is costly and the long-term effects of the chemicals used are not fully understood. However, if you have a damp problem, removal is still the best solution. Sand-blasting and other abrasive methods are not safe for most brick walls; they damage the hard outer skin of the brick, allowing erosion of the softer core.

Make sure your gutters are working well; you do not want water pouring down the wall. Victorian houses usually have a damp-course of overlapping slates. Older houses may have no such protection but do not worry; 'rising damp' is a furiously disputed phenomenon. If bricks are piled in a bath of water, moisture will rise above the water-level but only for one or two courses. If floor joists are above this level, and the walls are breathing, then your walls will be fine.

Make sure that the lead flashing round the base of chimneys is in good condition. Ideally, you should have a porous ground surface at the base of walls; gravel is good but soil with plants will also stop the bottom of the wall from being saturated. The ground should slope away from the wall.

For more detail, read the section on Damp.

Bricks can be cleaned but this is rarely necessary; you would never strip all the layers of polish from your antique table; your house has a patina too and it is best preserved.

New brickwork sometimes exhibits a white coating as it dries; these are various harmless salts derived from the mortar and bricks. Simply brush them off.

Do not sand-blast brick walls as irreparable damage is likely. In sand-blasting (or grit-blasting), a stream of air carrying sand is directed against a wall at high pressure. This abrasive process does remove dirt but it also scrubs off the brick and mortar surfaces which are usually soft in old buildings. The surface is left pitted and the protective outer layer damaged.

Re-pointing is often demanded by a building society. If the pointing just has a lime mortar, you are very lucky. Any loose mortar can be scraped out. Insist on the use of lime without any cement, and that the same style of joint is achieved. If the wall has already been re-pointed but with a cement-based mortar, it is best just to patch any failed areas with a lime mortar. If the corners of the bricks are flaking because the cement mix is too hard, then the pointing must be removed. Use a 'scutch', a special spiked chisel. With care, you can avoid major damage to the bricks. An angle grinder is often used but can cause serious damage. Match the pointing in the existing walls; avoid the modern 'weather-struck' joint. If you need tuck-pointing, you may have to settle for stained mortar with a flush joint.

For more detail, read the section on Pointing.

A common problem is spalled bricks: 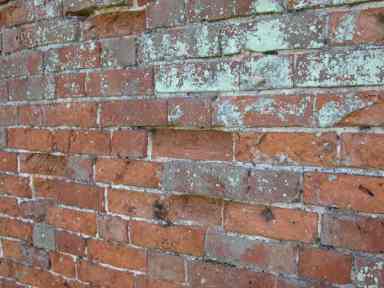 You have several options:

These options can be used for cracked bricks too.

Where cement-based mortar has been 'buttered' over the bricks, then you can attempt to remove it, but be prepared to have to repair the brick if it turns out to be damaged. Begin with an old coarse file; hold it as flat as possible to the surface of the mortar and scrub; you may choose to stop before all the mortar is removed and you start to scratch the brick.

You may need to match your existing bricks if you are building an extension or changing the positions of doors and windows. Reclaimed bricks are fine if you can match the type, colour and quantity needed. Make sure you use a SALVO member. However it is often hard to find good quality bricks; you want them unpainted and with good, crisp corners. There are a few companies which make bricks using traditional techniques. Insist on lime (with sharp sand), rather than cement for the mortar. In an extension, this should be used for the breeze blocks or modern house bricks used for the inner skin of a cavity wall. Try to match the bond; this will require half bricks for the headers.