The Queen Anne style of period house lasted for the second half of the 19th century, from 1860 until 1900. It has no real connection with the architecture of Queen Anne herself who reigned from 1702 to 1714.

Based on some of the Classical principles, the style is mixture of a few genuine Queen Anne details, with some Dutch, a bit of Flemish, a touch of Robert Adam, some Wren, and a little Francois 1st. It includes picturesque details, intricate gables, multi-paned windows, and Jacobean and Japanese elements. It is informal, irregular and asymmetric. The style was popular too in America, from the early 1880s. Whereas previously old furniture had been dismissed, antiques were now sought after to complement the comfortable, lived in style of the Queen Anne house.

It was common, particularly in London - in areas such as Chelsea, Bayswater, Kensington, and Maida Vale, but also in seaside towns. When it had reached America it evolved and became known as the 'Shingle Style'. 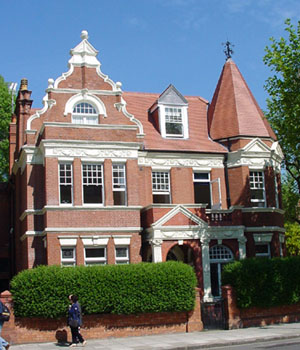 The response to the style among architects was extreme; some people loathed it for its artificiality yet others loved it for its exuberance. It satisfied the rising middle classes desire for showing off their success.

Matthew Arnold's book 'Culture and Anarchy' was published in 1869 and appealed to the new middle classes. They resented the old establishment. He argued that whilst one can criticise the upper classes for their self-satisfied and complacent and snobbish attitudes, the middle classes must rise above this and seek a new set of virtues. He labelled the objectives as "Sweetness and Light". By 'sweetness' he meant that people should create and admire beauty, and 'light' he used in the sense of 'wisdom', achieved through an enquiring mind. This also fitted in with a rise in secularism; people needed new beliefs. The worry of some that they were treading on those less fortunate in society was also eased; they could bring sweetness and light to these people too.

On this philosophy was founded the whole middle class ethic of working hard and helping others. The charitable works, political drive, and arguments for openness and freedom all resulted. With this came a desire to create a new look for their houses, both in architecture and decoration. The people who admired this new aestheticism rejected everything the previous generation had admired; they wanted muted colours rather than the vibrant chemical dyes, they chose fine, delicate furniture, and were happy to mix and match styles, although the mediaeval, Gothic look was too recent to be welcomed. Inevitably not everyone adopted these values wholesale and the extremes were ridiculed in the press and popular entertainment. However, one can expect most homes to reflect these changes in popular fashion.

The Queen Anne style came out of this background; the vocabulary that was to characterise was developed during the 1860s. Houses designed by people such as Webb, Norman Shaw, Nesfield, Scott and Bodley showed off:

It was only in the next decade that this new style began to be noticed as it was employed on public and other more significant buildings.

It was John James Stevenson who took these ideas and applied them to the standard terraced house. He essentially took a stucco-faced Italianate house, stripped it and added the Queen Anne details. So it was built in stock bricks with red brick dressings, had a multi-storey bay, Flemish-gabled dormers and ribbed chimneys on the roof, and the sash windows were given small panes and louvered shutters. Balconies, balconets and railings used a different style of ironwork and the porch lost its classical columns and gained a Flemish gable.

The criticism began rapidly. Writers attacked the eclecticism of the style. They said it was a bastard style, re-heated and anachronistic. Some however admired the craftsmanship. The arguments amongst architects that continue today were well-rehearsed; that architectural style should be pure, that lines and features should be strong, and heroic. The Queen Anne supporters came from a different viewpoint; that as artists they could do as they wished. The result should be judged on its beauty alone. They also argued that small-scale, vernacular buildings in particular needed a more human feel.

The style was used on many public buildings, particularly schools and town halls, but by the 1880s it was being used widely for smaller private houses. In the 1870s, artistic people would build to the style in a new attractive area of London such as Hampstead and Holland Park. Then the next decade saw the addition of terraces of these houses, often built by speculators, and then in the 1890s gaps were filled by single homes.

The exuberance of the style was well-suited for seaside resorts. Examples are Broadstairs and Westgate-on-Sea in Kent, and Cromer in Norfolk. One architectural feature whose role was expanded was the balcony; many of theses houses and hotels have deep balconies with wooden balustrades.

The vocabulary of the style was used quite consistently, and thus buildings in the Queen Anne style are very recognizable. The décor used inside however was much more eclectic; it was usual to decorate each room in a different style. The core of the look came from the England of the 17th and 18th centuries, but in practice elements came from many other sources. The period's view of the world brought together patterns and products from a range of countries, from Europe to the Far East, from Spain and Italy, via Greece to Japan and China.

The objective was a harmonious look that was easy on the eye. The bright and primary colours of the Gothic Revival were carefully avoided; instead colours from the Aesthetic and Arts and Crafts palettes were typical. This was still the era of Victorian clutter; furniture such as over-mantels had little shelves for vases, decorative crockery and ornamental brassware.

At the top end of the market, many of the architects, such as Philip Webb and Norman Shaw designed furniture, wallpaper and fittings.