Lighting in the Period House

Most houses were lit throughout the 19th century by candles and oil lamps. Gas was available in London for the last decade but electricity was not commonly used until well into the 20th century, after the First World War.

Although the energy sources used thus changed several times, light fittings had broadly the same construction and roles at each stage. Hence, candles were superseded by oil and then gas lights, and finally by electric fittings. However, for each, there were fittings designed for desk or table use, to stand on the floor, to fix to the wall or to hang from the ceiling.

Candles have been used for centuries, though more widely in more affluent homes; tallow was used by the poor. Wax candles were made from whale oil from the 1830s. These were then replaced by stearine candles, made from animal or vegetable fats which had been purified chemically. Candles made from paraffin wax in turn supplanted these. Light fittings essentially comprised a stand or bracket with one or more spikes or cups into which the candles were fitted. Candle sticks and candelabra were made from silver, bronze, iron, glass, and porcelain. Many were later modified for oil or gas.

Candles began to be superseded by oil lamps from the 1850's. Initially, oil lamps used colza oil made from rape seed but after 1860 paraffin was generally used. Oil lamps were cheap, simple to use, fairly clean and odourless, and smokeless.

To burn oil demanded a different construction from the simple candle fittings; a tank and burner were needed and because the light was brighter, a shade was generally used. Materials used included metals, ceramics, with the shade made from glass. Shades were typically in pink ('cranberry'), etched ('Vaseline'), or green finishes. 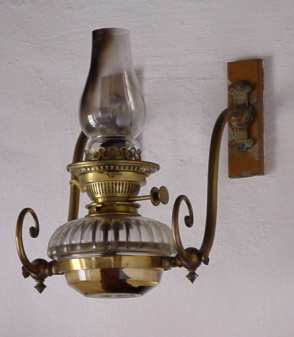 Gaslight began to appear in the first two decades of the 19th century, but was not available in London until the 1870s. It was not until the invention of the gas mantle in 1886 that gas lighting became common; by then the supply was in place and the new mantle created a brilliant light. Gas produced five to ten times the amount of light possible with a candle. The fittings had similar designs to oil lamps. It is difficult to find original fittings as they were often converted to use electricity. 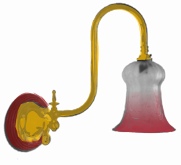 The next stage was the introduction of electric light, but only with the invention of the tungsten filament did it become effective. The early bulb had the power of 25 watts. Electricity began to be available from 1905, initially appearing in some medium-sized and large houses had electricity. In those early years, a house might have had just two sockets, one in the dining room and a second in the drawing room. Wiring was cloth-wrapped and placed in wooden ducting under the floor. Fittings were often in a Art Nouveau style.

Even by the First World War not all new houses had electricity installed. Indeed, the majority of houses still had neither gas nor electric lighting and continued to rely on oil and candles. The modern, frosted bulb was available by the 1920s.

So a London house in 1900 might have had a mixture of many different fittings, using either oil or gas, and from 1905 electricity as well.

Typically, a lantern hanging from the ceiling would be used in the hall. The drawing and dining rooms would have a central pendant, a pair of brackets or sconces either side of the fireplace, and table lights used for reading or other activities. A floor standard lamp was used later on, particularly if electricity was available.

Other rooms, including the kitchen, would have a pendant fitting supplemented with table lights for tasks such as cooking, dressing or reading.

The earliest electric lights in the 1870s were operated by a brass jelly-mould style switch. From 1890 a plain brass switch was typical. Bakelite was invented by Leo Beakeland in 1907 and was in use for switches by about 1910. 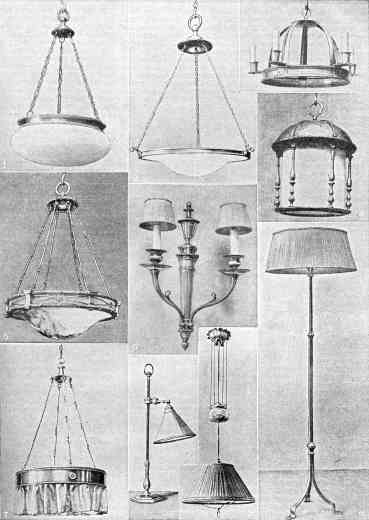 examples of electric lights from the 1920s

See also the DIY section for information about designing lighting schemes for the period house.