The Design of the Victorian and Edwardian Front Door

The ideal external door was in oak or mahogany i.e. hardwood; in practice most were softwood, usually pine.

The front door styles in Victorian and Edwardian houses were many and varied; typically with fielded panels and stained glass windows. Stained glass allowed light into the hall, but preserved privacy.

Doors, windows and exterior ironwork were painted in the same colours. Until the Edwardian era, all paint was either matt or semi-gloss.

Late Georgian front doors (1765-1811) were black or occasionally dark green. In the late 18th century, bright blue was also used. In the following two decades, doors were black or bronze-green.

Victorian front doors were most often painted green or grained. Until the end of the 1860s, other colours used were dark blue, a chocolate brown, deep red, or else olive green. Supporters of the Aesthetic style used black, or slightly grey or yellowy white. The Queen Anne style favoured dark green or white.

The colours most commonly encountered on front doors in the late-Victorian and Edwardian periods are bronze green, deep Venetian red and various types of woodgrain effect.

It became fashionable to use two colours on exterior joinery in the interwar period.  Light Brunswick green and cream was a particularly popular combination that can still be seen occasionally on suburban houses of the 1930s. A decorating manual published in 1924 shows some startling, rather jazzy colour combinations. 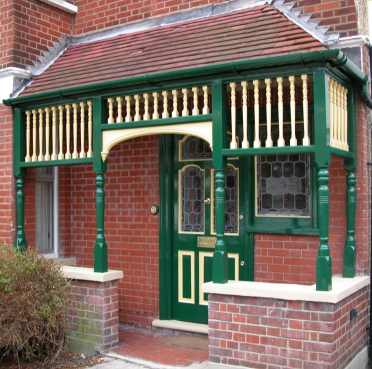 Edwardian door and porch, done in colours more likely in the 1920s and 1930s

For an urban house, brass was more usual than wrought or cast iron. Front door furniture in the Victorian era was brass, polished rather than lacquered. From 1900 more use was made of black door furniture; at a time of a shortage of domestic staff it required less polishing and the increased admiration for craft styles meant that wrought iron was popular. The house number was often on a black on white enamel plate.

See the section on Door Furniture.