When looking at a period house door, you can dissect it into many different fittings. The most obvious are knockers, hinges and finger plates.

Often these components would be combined; for example an escutcheon might be incorporated into a finger plate, or the pull on a front door combined with the knocker.

Visitors and tradesmen would announce their arrival to the servants by a bell, either at the front door or a tradesmens entrance. Originally, the pull would operate the bell via a cable, but with the advent of electricity, push buttons became more common.

This fitting followed the trends in the use of materials for other door furniture. A common design for a push at the front door is a round brass plate set on a wooden patten.

The cover for the keyhole would often be highly decorated and made from the same materials as the other fittings.

A cast iron scraper was sometimes set into a wall or fixed to the ground. With the increase in paved roads, these were no longer needed in urban areas.

Finger plates were often in pairs, with a larger one above the knob and a smaller plate below.

The plates were sometimes in glass or porcelain; these might be plain or decorated with, for example, a gilded border.

Most London houses of the period would use brass or iron butt hinges set into the stile and the jamb of the frame. Rising butts appeared towards the end of the 19th century for internal doors.

The doors to outside toilets or outbuildings would commonly use strap hinges, mounted on the face of the door.

Door numbers have been compulsory in London from 1805. New streets were named and the houses numbered from 1765 when an Act of Parliament had been enacted.

The choice of name has been influenced over the decades by prevailing fashions - in the early 19th century house names tended to reflect a rural idyll, for example referring to flowers. Later in the century, house-owners wanting to make an impression might call their home 'The Lindens', 'The Rowans' or 'The Hilltop'. With the Gothic revival came an interest in history and a more rural past and so names reflected this; for example 'The Gables'. Military victories have also been an inspiration such as 'Trafalgar', or the battles of the Crimean War. Late Victorian houses are often named after places discovered, or holiday and rural locations such as 'Clovely [sic?] Villa', 'Melrose Villas' or simply 'Lyndhurst'. Others are rather mysterious; for example 'Blodva' and 'Eirianva'. 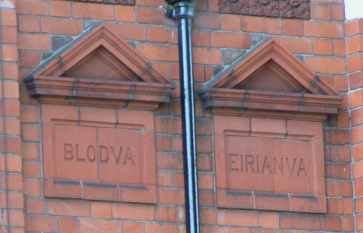 In times of uncertainty, such as the Edwardian period, simple names like 'Irene Villas' or 'Carolside' found favour, but names of places continued to be used. You can also find made-up names, for example 'Cranhurst'. Other names come from Authurian legends, for example 'Astolat'.

House names may once have been in wood but these are unlikely to have survived. Others are in stained glass above the front door, or carved into stone plaques. Lettering styles are of the fashion of the time.

Most houses have only numbers; these were painted, set in stained glass, or engraved on a plate. Enamelled numbers were also used.

Door knob styles were many and varied. These are late Victorian and Edwardian examples:

These examples all have a 'rose plate', a flat plate which hides and decorates the hole into the door.

The knocker, if present, was usually placed centrally on the door, and at about head height.

The doors to outside toilets or outbuildings would often have a latch, a finger-operated closing mechanism, rather than a surface or butt-mounted lock.

Letter plates or boxes came in after the introduction of pre-paid postage stamps and regular door-to-door deliveries in 1840. Letter plates were smaller than today; there was less post and a maid would usually have been available to open the door.

They were in brass and iron, and elaborate - not smooth brass like so many today. Commonly the plate was cast or stamped from a sheet of metal, and decorated with fretwork or from the pressing process. Iron ones were sometimes painted to match the door.

Mortise locks, set into the closing stile of the door, were generally used on the front door. As the 19th century went on, these locks were fitted to the more important internal doors, ousting the rim lock fitted to the surface of the door. By the end of the century all doors normally had mortise locks except those on outside toilets, sheds and the like.

The number, or name of the house, was often painted onto the glass of the transform window, above the front door, or on the woodwork. Alternatively, the numbers would be on an enamelled or engraved plate. In the case of the latter, black wax could be used to highlight the numerals. Alternatively, pressed or cast numbers were common.

Front doors sometimes had a special large knob or a handle for pulling the door closed.

Stone and wooden door steps can be protected with a brass plate. Because of the unique shape of each step, these tended to be custom-made.

For companies specialising in this area, see the Products and Services Directory.