The style of clock known as a 'Pendule de Voyage', or 'carriage clock' is a table clock, usually metal-cased, and intended for travelling. It is therefore small and may perhaps have a protective case. This style is a clock that will go well in the smaller rooms of your period home.

However, the first production carriage clocks appeared in Paris in 1830 made by Paul Garnier. He invented the 'chaff cutter' escapement.

Carriage clocks not only tell the time on a journey, but also strike the hours and often have an alarm. This makes them very useful, versatile clocks. Other features include 'repeating work', where the last hour struck can be sounded again at will. Striking complications extend to 'Petit Sonnerie' and 'Grand Sonnerie'. Grand Sonnerie is where the previous hour is struck along with the relevant quarter. So from 4.45pm to 5pm it will sound five blows followed by three ting tangs. Petit Sonnerie strikes the hours on the hour but only the quarters at each quarter. If you find a clock described as Grand Sonnerie, but the striking runs down after four days or so, it is only Petit Sonnerie with a component removed to make it strike as a Grand Sonnerie.

Carriage clock escapements are typically English lever, sometimes called 'ratchet tooth' escapements or 'cylinder' escapements. More modern ones have a 'Swiss Club tooth' lever. These are often fitted to old clocks as well, because of the failure of the clock maker to repair them or for economic reasons. Lepine used the duplex escapement, because in France it was thought to be superior. 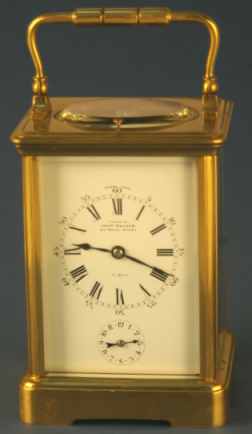 When buying a carriage clock, you should bear in mind servicing and repair costs. For example, servicing of a carriage clock with Grand Sonnerie is going to cost around £500 but major restoration work would cost substantially more.

Carriage clocks are usually not as sophisticated as the one pictured, but they are all very similar in appearance today. Having said that, a great variety of exquisite decoration techniques have been applied to these clocks but any such clock now would be prohibitively expensive.

Some examples of Breguet can be found in the Ashmolean Museum in Oxford and at the British Museum in London. 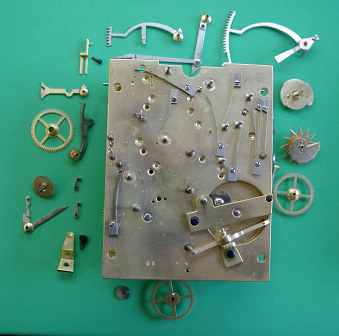 Some of the strike control work of the clock mounted under the dial.